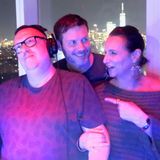 Austin is a longtime member of the music & club community in New York. He co-founded the DJ trio EASY which currently makes guest appearances at such hotspots as THE CARRY NATION, BIRDCAGE, HARDER & THE STUD in San Francisco.