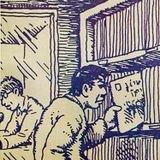 DUSTY AND VOCO-Vol 3 Im A Man
by Allan Stephenson

SIX STRING SUNDAY-Vol 11 When Its Gone
by Allan Stephenson

I started paying attention to music when a youngster in the mid fifties in England. All there was then was three channels on the BBC and Radio Luxembourg and whatever records (78s) my elder brother would bring home. I discovered some music moved me- like swing and rock & roll and classical. I started noting the ones I liked. I learned that music can be organized into what you want it to do for you. Rather like lighting in a room it can make or destroy a mood. I also discovered that to most people music is not as important as to me. I suppose the sixties and seventies are more represented in my collections as those times were when I really absorbed much music being in London then San Francisco during those periods. My taste is of course from these periods. Each playlist or "set" is thematic. There is a beginning middle and end... which I hope listeners stay for.