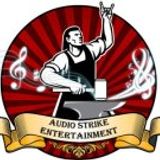 Audio Strike Promotes, Books and Manages up and coming Bands in the Tri State Area!
Audio Strike and Rob has Promoted and Booked such bands as:
Parabelle (Formerly Evans blue and Neverset),
Silvertung,
Backside Jones,
Lix,
Walk INS Welcome,
Hawthorne Heights, Self Centered,
Handguns,
After Midnight Project,
The Getaways,
Loving the Lie,
Not My Own,
Loomis & the Lust,
Playground Etiquette,

Rob (Audio Strike) also has connections with many major bands and Promoters!
All the Bands you see him in Pictures with, He is actually friends of the Bands!

Now, let’s not forget what he did for an Average Band that played at a local Elkton club about every 6 to 8 weeks!
Average?
Rob saw Great Potential in them!
He saw the potential of this Band and the Talent that they had!
With his knowledge of venues and simply having contacts in the music scene, he took this Band & had them te