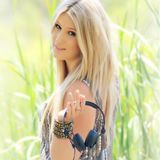 Ashlee kicked off her DJ career after winning a radio competition in March 2010.
Now based in Adelaide, she is playing sets at some of Adelaide's most well known night clubs and bars.
June 2012 she made her international debut playing in Indonesian night club, Legian SKY GARDEN in Bali.
Early 2014 Ashlee entered the Firestarter Vodka Australia’s Hottest Female DJ Competition. Her entry got her to the top 4 finalists, where she then played off at the Firestarter Vodka Australia official launch party where she placed runner up overall.
She has supported and played along side many well known Australian acts such as Uberjak'd, The Twins, Timmy Trumpet, Kronic, J-Trick, Reece Low, Havana Brown, Seek N Destroy, Krunk and Mobin Master to name a few.