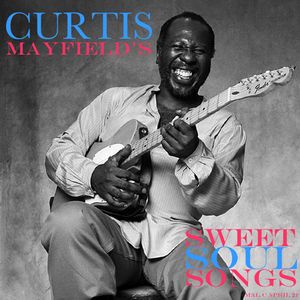 Welcome folks, was listening to an old Dave Godin interview, where I heard Fascinations 'Trusting In You'. I didn't have an MP3 so out went the call for the Sequel CD from 20 yrs back, the response from Alan T was phenomenal! So I got the CD with all the Mayfield's recordings, thats the group the Mayfield's, & the Fascinations recordings that they put out, and then to top, a collection of Curtis Mayfield Camad Publishing Demos from 1970 / 71, so those were Publisher cuts to sell his songs basically, not for commercial release but oh so good ! Mix-cloud won't allow me to just put up songs by same artist because of copy write control, but I've woven them into a selection of tracks all penned by Curtis.

Desert Island disc this one, never met anybody who doesn’t ‘crumble' to Curtis!

Excellent, a fair representation of the genius he was. Thanks for posting.

Thanks Carl, I did only cover his sweet sides here, so really it's his earlier songs and compositions I’m really interested in...

Wow thanks Mal. That was an emotional 45 mins! Unbelievably amazing talent he was. I sense more ‘Mayfield’ mixes to follow, hopefully

Oh yes! the Camad Publishing Demos are all unbelievable songs, shame I can’t put them all into one mix... cheers Steve :-)

So smooth. Thank you

you're very welcome, best mix Ive done this year, Curtis all the Way!