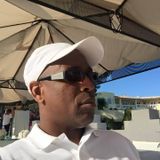 Antonio’s love of music developed from a young boy with his mums Gram blasting tunes and grew up listening to John holt which is now one of his favourite reggae artists. When Antonio was growing up he would often sneak out of the house to catch the big sound systems like Shaka, Coxson,too many to mention, it was worth all the punishment when he got home.

surviving the scathing of his mum at the tender age of 16 Antonio built his own reggae sound system and then progressed to House & Garage which set the precedence for the love of this genre of music.

He went on to create Crazy Mondays with the help of Creed, Norris Windross, Dominic Spread Love, and many more friends, the journey began at house parties at 7am every Monday morning . playing alongside DJ’s such as Karl Tuff Enough Brown, Matt Jam Lamont, Hermit, Nigel Ben, Norris Windross, Dominic Spread Love, Bobby and Steve, again far too many to list.
The stories go on more shall be revealed..