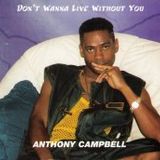 UK Reggae Artist with quite a few hit songs over the Years proformed with most major artists from Jamaica and the USA. Also the owner of one of Europe's largest record distribution company offices in the UK, Holland, Germany and reland also In USA

It was thirteen Year ago, that Anthony Campbell first began his career entered into the world of music, since then he has made an impressionable mark as a talent vocal artist, songwriter, producer and businessman. His story is one of admirable courage ambition, determination And a true spirit of overcoming.

Born in Stratford, to Jamaican parents he migrated early to the island of Jamaica at the young age of six located first in the rural parish of Trelawny in his primary years of schooling before progressing and later moving into Albert Town Secondary and then Holmwood Technical high school in Manchester where he would graduate.

Whilst living in Jamaica, like most singers he was very much involve in the church singing on the choir do