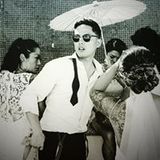 Never miss another
show from Goldstein

A firm advocate of DJs writing bios about themselves in the third person, Anthony Estacio, known as Goldstein, started DJing in the early 2010s.

Since starting from humble beginnings with a modest setup in his bedroom, Goldstein has since brought his curation of obscure Future RnB, Hip Hop/Trap, Reggaeton and other genres to some of Toronto's eclectic venues and internationally. His love for cross-genre mixes has led him back to the bedroom with the three year old 'Bedsqueaks' series.