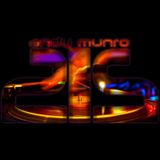 Never miss another
show from andymunro

Owned first pair decks in 1996 and has worked as a DJ / Producer / Remixer based in the north west of England. Enjoyed playing out to clubbers all over Great Britain, Ibiza, mainland Spain and Amsterdam.

The first Mixmag Bedroom Hero (July 2004) has played to 1000's in warehouse parties and raves in fields as well as big club nights such as Gatecrasher and Goodgreif but loves to be closer to the dancefloor in the smaller venues and bars just as much.