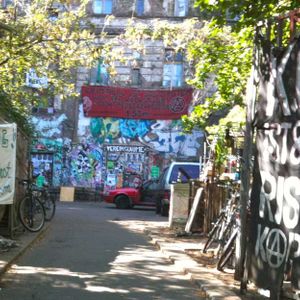 Interview with anarchist squatter in Berlin - Kopi 2009by Andrew Flood

An interview carried out August 2009 on the legalised squat / collective housing project Kopi with Shane about anarchism and political activity in Berlin.

The conversation covers a number of areas including the economy of the city, gentrification resistance, strikes, tortured geography, the legacy of the 80's squatting movement, the collective housing movement today, Kopi and its many bars, the place of the collective houses in the Berlin left, the drawbacks of the 'scene', organised anarchism in Berlin, the nature of the autonom groups, post apartheid South Africa, economic re-structuring, struggles around service delivery, the role on 'internationals' in the Berlin scene, and anarchist publishing with the anarchist media group.