by The Backbeat Experience
42:15 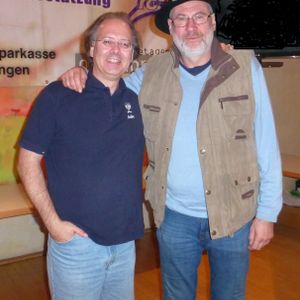 Backbeat, His nickname, As musician late in life, Back up band, Working with Steven Wilson and Arjen Lucassen and more.

Interview with Scottish singer Fish, former frontman for the band Marillion from 1981-88. We met during his tour in Winterbach on October 30, 2014. We sat in the den of his tour bus (which explains the background noise) and chatted about his career and his inpiration behind the album "A Feast of Consequences" ignited by his visit to France and the details surrounding that sojourn. A down to earth fellow with plans to retire from music in 2 years, move to Germany and step into the next chapter of life with other projects.

More from The Backbeat Experience