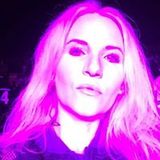 As Laura Escudé is known around the world for her expertise in music technology and programming for the likes of Kanye West, Jay-Z, Herbie Hancock, Bon Iver and more, her gigantic Alluxe sound is set to take the electronic scene by surprise. The former award-winning concerto and symphony violinist produces some of the most growling, banging and gritty electronic beats in the game.With Alluxe, Escudé puts focus on her craft as a producer, composer and performer. And the response spread instantaneously: she’s already opened for the likes of Garbage and RYAT, and performed at LA’s Low End Theory, in addition to being commissioned for remixes by M83 (‘Steve McQueen’) and Poliça (‘Lay Your Cards Out’).

As a DJ, Alluxe’s unpredictable sets seamlessly blend artists across the board, from The Weeknd and James Blake, to Lapalux and Machinedrum, and Juicy J and Araabmuzik. But Alluxe doesn’t just DJ—as a live performer she improvises beats, violin loops and thrashing effects.