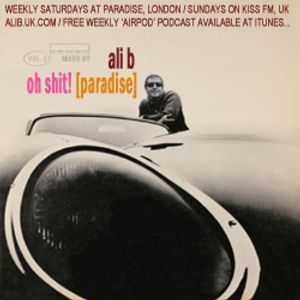 Ali B’s weekly Saturday night Paradise sessions in West London have been an instant hit since they started around two years ago, with the sole purpose of bringing the funk back to the mean streets of London. All sorts of established DJs have been down, playing their alternative selections, mostly unannounced, alongside Ali B’s own eclectic style, seamlessly taking in everything from blues and funk to rock, soul, dub and disco. The ever faithful crowd regularly let loose on the low-lit dance floor, with the only complaint being the late night long queues, Ali B’s drunken shouts of ‘Oh Shit!’ on the microphone and his notorious ‘request are £10’ sign, which to this day, as far as we know, nobody has ever actually paid.... For fans of the night or those who are just curious, you can listen to the second volume of Ali B’s ‘Oh Shit! (Paradise)’ mix here.

And I find it spinning round in my brain - like the bubbles in a glass of champagne. It goes to my head.....👌

Awesome, this is the sound track I brew with!!

every mix you do is pure dop

More from Ali B