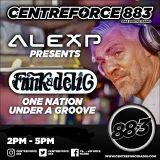 Alex P a corner stone in the history of House Music. He has for over 30 yrs Dj'd all 4 corners of the world to crowds as large as 52,000.
He is renowned for his ability to change his style to rock any crowd, enjoy taking a risk and has played most genres of music over the years. Alex found his feet in the late 80's Djing at London's Hottest Clubs at the time Legends, Astoria, Limelight The Park and Heaven to name but a few he was a resident with the Crazy Club and involved with some of the early raves Sunrise back to the Future etc. Alex was drawn to the White Isle it was like a magnet to him so much so May 1990 he packed all belongings and drove to Ibiza in the hope of making it there as a DJ. Times were tough most Clubs and bars had long serving DJ's after relentless pushing he Landed residency in Amnesia the rest is History
Radio Presenter and award winner at Kiss Fm in the 90's
Mtv Presenter
Space Terrace Ibiza (James Mitchell)
Velvet Rooms London W1 (Paul Saunders)