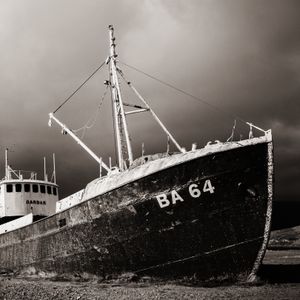 Launched in the same year as the famous "Titanic", the whaling ship, named Gardar BA 64, was a hybrid that had a powerful steam engine in addition to sailing equipment. Originally known as the Globe IV, this huge ship was built in Norway in 1912 as a modern whaling ship... in 1981 Gardar VA64 was finally declared unsafe for operation. But instead of sinking it, the owner pulled the old ship aground in The Scapadalur valley (Iceland), where it is still gradually falling apart. It is now a popular destination for photographers and lovers of the combination of Iceland's natural scenery and industrial ruins. You can get to this beach if you follow highway 612. +65.5162 -23.836893 FLAT.AUDIO podcast: https://flat.audio/airkey/gardar-ba-64 Follow D. Polo: https://www.mixcloud.com/D_Polo/