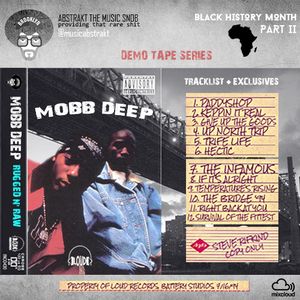 So this weeks DEMO tape is by Mobb Deep pre-Infamous album release from 1995. Now there are 2 types of demo tapes circulating over the years on the net. This one is the real deal. Their famous song "Shook Ones Pt. 1" never made it to the official album release. Part 1 was used as a promotional vinyl and so Mobb Deep went straight to Part 2 on their Infamous album, which became a classic.

The songs on this demo tape were either re-done by Producer Q-Tip who changed some in order to clear samples. The others never made it and were mostly done by Havoc himself. Quality is as suppose to be. Recorded between 1993 and 1994. It was unmastered before handed over to Steve Rifkind owner of Loud Records which Mobb Deep joined thereafter.

Look out for Tape 2 which I will release soon with some hot exclusives from Mobb Deep.

this is so raw

Thanks for listening check out Part 2 of Mobb Deep https://www.mixcloud.com/abstraktmusic/flavor-for-tha-non-believers-mobb-deep-exclusives-uncut-tape-2-mixed-by-atms-2014/

Peace to Matty C & the entire Original MindSquad... We life for/& thru this!!!! Thx #ATMS

"Matty (Matty C, Capoluongo a.k.a. Matt Life (Executive Producer and A&R for Loud Records): Schott worked closely with them on how the rhymes were coming and I worked closely with them on how production was coming. The first thing that I remember is them creating a semblance of the core of the first album and me creating a rough in-house version what the album could be and throwing a sticker on the cassette.

There was an initial five or six songs on a tape that was the nucleus of the album which had the original versions of songs like "Survival of the Fittest", "Shook Ones", "Give Up the Goods", and "Temperature's Rising". There was a couple of other things that didn't make the album. The major issue was, of course, the samples.

That early Mobb Deep tape, some of it leaked and a lot of people consider it a demo. But let's not forget, Mobb Deep already had a major label record deal. They had already put out a record. And if anything was to come out after that, it would be the first song that Havoc came to me with at The Source after that deal went through, which was "Patty Shop". That was what first started Mobb Deep's second run.

I gave "Patty Shop" to Stretch Armstrong, he played it on the radio, and Stretch really turned Steve Rifkind onto it. We wanted to come with that first, but we kept going back in the studio to make it sound better because it was made out of their house. The drums were over "Halftime" and Redman was in the chorus believe it or not on a Mobb Deep song. They wanted to take some out and make it more of a track. It never came out sounding the way they wanted it to and we ended up not wanting to use it." (Complex.com 2011-04)