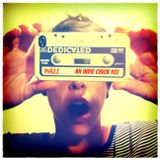 Never miss another
show from Phizz

Let's get phizzical - mixtape#5
by Phizz

I'm Phizz (a.k.a. Filipa Marta), a Portuguese DJ based in the beautiful Lisbon city, who loves inspire you to dance indie, synthpop, electro and R&B. I began mixing in 2011 and since then I've built a vast curriculum and never stopped, mixing at various bars, clubs and other spots, as well as festivals and cultural events. I always improvise according to the public in front of me.