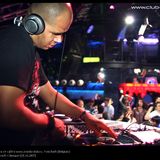 Never miss another
show from Yves_Bash

From Belgium, since few years behind the decks and after playing in many country, Yves has succeeds to impose his style who is a mix of electroclash, electrorock, electrhouse, trashinghouse ...but always with kicking sound. Influenced by old waves like Electronic Body Music, New wave, Rock, Punk, etc...
In 2012 he starts a new electrohouse project with already some livesets and promo mix on his soundcloud. He also made productions on Ventuno Records and Tailwhip Records, but also some free productions and remix like Dada Life, Boys Noize, Dead Cat Bounce, Killaqueenz, etc... New tracks are in preparation.
During his career he played in the best clubs and parties in Belgium but also abroad with some big parties or clubs in many country ( Canada, Russia, Germany, Belgium, France, Slovenia,Holland, Portugal, Colombia, etc. Stay tuned for the next..