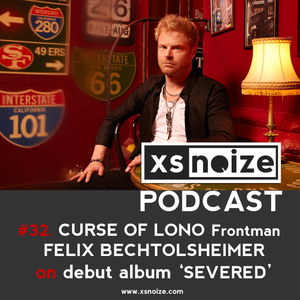 Welcome to episode #33 of the XS Noize Music Podcast. This episode Mark Millar is joined by Curse of Lono Founder and frontman Felix Bechtolsheimer. To talk about their acclaimed debut album ‘Severed’ which was released on Submarine Cat Records on April 7th.

Founded and fronted by Felix Bechtolsheimer, formerly the singer-guitarist in British roots pioneers Hey Negrita, Curse Of Lono formed in early 2015, though the songs on ‘Severed’ were written over a 14-year period. They range from the perky, Paul Simon-ish new single ‘Pick Up The Pieces’ to the more lugubrious ‘He Takes My Place’, the almost jazzy ‘London Rain’ and the rootsy, rhythmic ‘Send For The Whiskey’. The album belongs as much to the Americana tradition and old faithfuls such as Little Feat as it does to more modern, playful practitioners of the form such as Beck.