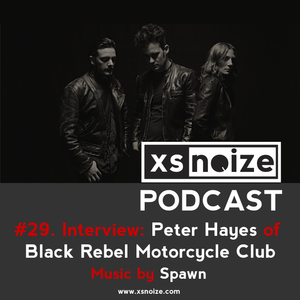 Welcome to episode #29 of the XS Noize Music Podcast. On This weeks show Cortney Armitage is joined by Peter Hayes from Black Rebel Motorcycle Club.

“Peter Hayes came into the dressing room at Terminal 5. There we were at back stage before “The last rock ‘n’ roll show before the end of the world”. It was election night and while the elephant in the room was large, we managed to keep the interview about the music. Covering topics in his song writing to the epic struggle between good and evil, to the emotions felt playing songs, Peter Hayes is honest and heartfelt as they wound down their latest – and much overdue tour”.

This weeks featured track is from Spawn. SPAWN is a high energy brass fuelled skapunk band from the Netherlands, keeping the beat rocksteady and the upstrokes a-skankin’. The band consist of guitar, bass, drums, keys, horns and vocals.