Wasn't That A Time - Episode 40: Revisiting The Vietnam Songbook: The Alternative Soundtrack 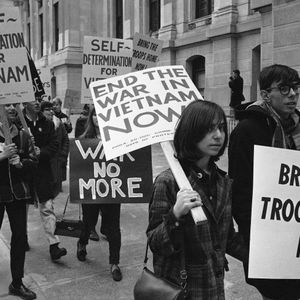 In 1968, Barbara Dane and Irwin Silber compiled 100 songs for The Vietnam Songbook. In the Foreword to the publication they wrote in part: Several years ago, when we first began compiling songs concerning the war in Vietnam, we organized a concert in New York City whose purpose was to create a public protest against the war. We were moved then by a sense of outrage, a sense of shame, a sense of horror at the crimes being committed in our names. We knew little of Vietnam (as we had known little of Korea, a decade earlier, as we knew little of Algeria while it fought the French). We knew our own frustration, our own sense of impotence in the face of the machinery of our own government and our inability to change the course of events. The book is designed as an act of solidarity, a testament of friendship, between men and women of the United States of America who oppose and work against the criminal policies of their government and their comrades of Vietnam – both north and south.

Great show on the songs of BROADSIDE: THE NATIONAL TOPICAL SONG MAGAZINE! How is it that people who learned from all of this history could allow themselves to believe in the false flag lies of 9/11/01? What happened? It's like telling Vietnam era people that you can't look into the Bay of Tonkin fake event because it will somehow work against the anti-war effort to expose such blatant lies for war profiteering. I went from Broadside to "9/11 Truth & Justice Songs" and got a lot a BS from former "progressives" and "liberals". Look them up at CD Baby! An acoustic version of the Phil Ochs tribute song "Broadside Balladeer" is on that CD with Eric Golub on violin. Loved the show!