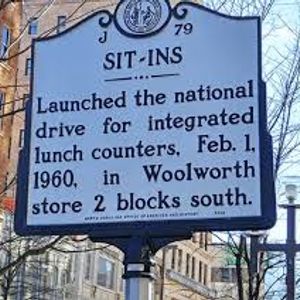 Artist: Sweet Honey In The Rock.

This episode marks the sixtieth anniversary of the lunch counter sit-ins. For folks unfamiliar with that momentous moment in American history – here is a bit of a recap. On February 1, 1960, four African American college students - Ezell A. Blair, Jr., Franklin E. McCain, Joseph A. McNeil, and David L. Richmond sat down at a segregated lunch-counter in Greensboro, North Carolina. They politely asked for service, but their request was denied. When asked to leave they remained in their seats. Their actions sparked a youth-led movement to challenge racial inequality throughout the South. Songs performed by: Sweet Honey In The Rock; Flawn Williams; SNCC Freedom Singers; CORE Freedom Singers; Pete Seeger; Joan Baez; Matt Jones; Barbara Dane & The Chambers Brothers; Guy Carawan; Earl Robinson; and Kim & Reggie Harris With Magpie will be played throughout the program.