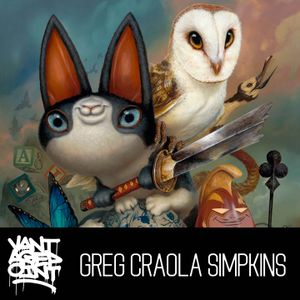 Greg ‘Craola’ Simkins has accomplished something that many have attempted but only few have succeeded in doing. He crossed over from the graffiti world into the fine art world with huge success and very little compromise, and in doing so has influenced a generation of artists to attempt to follow his lead. His work is highly sought after and sits in some of the most respectable collections around the globe. His acrylic paintings dance in the space between the real world and the imaginary with an unmatched level of craftsmanship. Bursting at the seems with creative energy, Craola’s imagination can hardly be contained within the borders of a canvas. He has branched out to clothing, sculpture, animation, among other things and has his sights set on a few new endeavors he couldn’t talk about publicly just yet. It was an honor to have Mr. Simkins sit down with us during our time in LA and we are very happy to be able to present his thoughts and knowledge to our listeners.