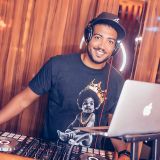 Just Another Saturday
by Urban Aristocrat

The Urban Aristocrat, aka The Aristocratic DJ or as his friends call him, Murray, began his DJ career in Atlanta. Music has always been an essential part of Murray’s life but he never thought of becoming a DJ until befriending DJ Catalyst while in University. Fueled by a love of music and a reputation for hosting/MC-ing events, the Urban Aristocrat was born. He began spinning mostly hip-hop and R&B but slowly deepened his catalogue to accommodate more diverse crowds while, remaining rooted in the urban culture.