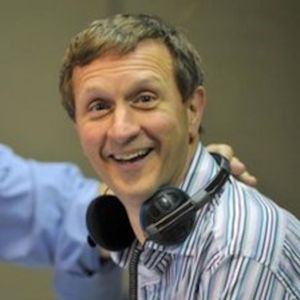 On 11th June 2013 radio presenter Rory Morrison died. Rory worked at Beacon Radio in the late 80s. He presented the afternoons show and the travel news (as "Fonzie"). He moved to the BBC and later worked on Radio 4 – a regular & recognisable voice.

I worked with Rory, at Beacon, in the summer of 1989, and he showed me so much about the art of radio presentation. A lovely chap, happy & friendly, unflappable, a real professional and I've still got the presenter card he signed for me!

In 1st April 2006 he was a surprise 'guest' on my own Saturday Morning show, UpAndHappy! To set the scene, each week I ran a Sports roundup, read by my mate Andy Walters in the style of Tony Blackburn. The character needed a name, and Andy found Rory's jingle. I thought it'd be a nice tribute, not that Rory ever spoke in such a cheesy style! We used the jingle and the name each week until one April Fool's day... well, listen for yourself...

Bless you Rory, you inspired me more than you'll have realised.