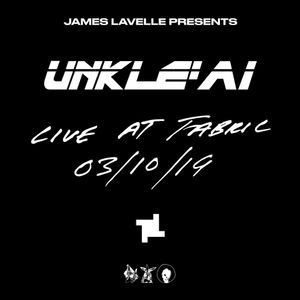 After being involved in starting the long running Fabriclive night on Fridays at Fabric, and being a resident for 5 years, including mixing the first ever Fabriclive mix cd, I was asked to curate 2 nights as part of the 20 year anniversary celebrations of the club last year. For the Thursday night, I put on the second UNKLE:AI show, together with my long term touring and studio collaborator Steven Weston and visual artist Patrick Krause. We built a sculptural tower like installation set up in the centre of the dance-floor, so the crowd could view the experience from 360, from above and below, due to the stage and mezzanine in room one. Apart from a few technical problems, which have been edited out and replaced, it was a very special night for me, and really great to be back at Fabric after all these years (10 years to the week) in a club that has had such a profound impact on my Dj and musical career.

A religious experience . Welcome to the church of UNKLE!

What's the rap track half way through?

One of the best mixes I have ever heard! Wish I was there!!!

hi guys, is there a track list.. with time.

This is the most beautiful journey James Lavelle has ever brought us on.

Love it. One of the best Unkle mixes.

I’ve been in the house game for 18 years and this is one of my favorite mixes. Just so good. Any chance of making this available for download or iTunes? I must have! Ok thanks for the good work and bye

What Is the massive attack Remix??