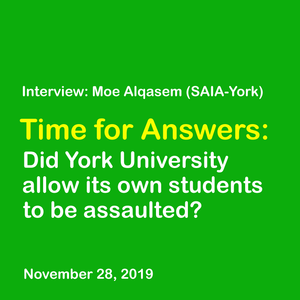 This show was 24th in the global interview chart.

On Nov. 20th, Israeli soldiers were invited to York University as part of an event organized by the pro-apartheid group Herut Canada.

A large number of York students showed up at the event to protest the presence of occupation soldiers on their campus. Unfortunately, protesters were met with verbal and physical attacks, mainly due to the presence of the JDL, a pro-apartheid off-campus extremist group previously banned by York University.

It was reported that York security, police officers and some York administrators were present during the protest and witnessed the attacks by JDL members, but did nothing to prevent it. Today, students are demanding accountability.

I had with me on the phone SAIA (Students Against Israeli Apartheid) organizer, Moe Alqasem, who talked to us about what actually happened last week at York University. SAIA organized the protest.

Interview by Sawssan Kaddoura for Under The Olive Tree
facebook.com/uot.interviews
twitter.com/uot_interviews