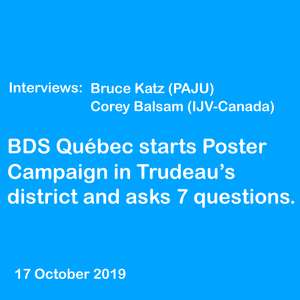 On October 10, BDS Quebec held a press conference. BDS Quebec is a Third Party in the ongoing Canadian Federal elections. A 'third party' is a person or an entity that is not a political party, candidate or constituency association, but that engages in political advertising during the elections.

As part of BDS Quebec's activities in this election season, was, first, to launch a poster campaign in the streets of Montreal, targeting 3 specific neighbourhood, which includes the Prime Minster's, Justin Trudeau, district, Papineau. Secondly, they held a press conference where they cited 7 questions they would like the main political party's leaders in Canada to address.

I talked with 2 of the speakers at the conference, Bruce Katz (PAJU) and Corey Balsam (IJV), about BDS Quebec's Poster campaign and the 7 questions they would like to see added to the Leaders' debates.