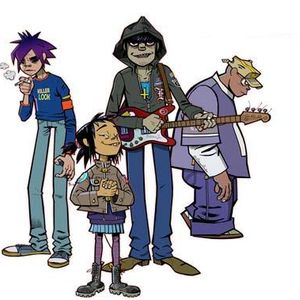 Gorillazby One Hour Of Tribute

Gorillaz are an English musical and visual project created in 1998 by Damon Albarn and Jamie Hewlett. The project consists of Gorillaz itself and an extensive fictional universe depicting a "virtual band" of cartoon characters. This band has four animated members: 2D (lead vocalist, keyboard, and melodica), Murdoc Niccals (bass guitar and drum machine), Noodle (guitar, keyboard, and occasional vocals) and Russel Hobbs (drums and percussion). Their fictional universe is explored through the band's website and music videos, as well as a number of other media, such as short cartoons. The music is a collaboration between various musicians, Albarn being the only permanent musical contributor. Their style is a composition of multiple musical genres, with a large number of influences including alternative, rock, hip hop, electronica, dub and pop.

More from One Hour Of Tribute