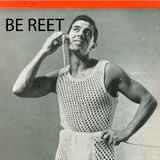 The Be Reet Radio Show

Never miss another
show from The Be Reet Radio Show

The Be Reet Radio Show

Tony Thornborough and Steve Nicholson met in the early 90's and very quickly bonded over a love of music and comedy; Steve was trying to be in a band and Tony was laughing at him. They quickly became inseparable except for 13 years when they never saw each other. They met up again in early 2013 and found they still have one fundamental thing in common - neither of their wives think they're funny.
Steve and Tony sound like they are never serious, but they do take the music they play very seriously. Everything will eventually Be Reet.