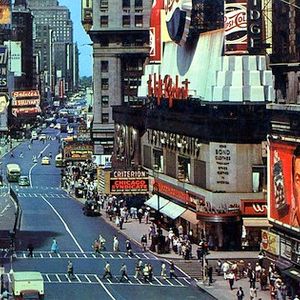 Of course, I knew that when most people referred to Broadway, they were referring to the one in New York. When I moved to New York, I worked for a while as an usher in a movie theater on East 34th Street. Once in a while, I had the job of taking the tickets, receipts, or sometimes the reels of film in big cans to the chain headquarters further uptown. I loved those trips—and from my POV, I was getting paid to be a tourist—to walk down Broadway. Broadway! This street was famous, I thought to myself, it’s in songs and movies, and now I’m walking on it!

Hay is there any way to list the songs and artists in the playlist?

Nice concept for a mix. For clarity: Arlester "Dyke" Christian was the person who actually wrote "Funky Broadway" (without the "The" that appeared on the album cover). Being from Buffalo, the song referred to
the Broadway there, but there was also a road in Phoenix called "Broadway" that he was enamored with as well, so that found its way into some aspect of dedication.

Personally, even tho George Benson bedswerved "On Broadway" into smooth "funk" oblivion and left me feeling like I'd never want to hear that song again, I'm still a fan of the impLOG version of it.

Here we are in a room full of strangers

Since I can’t make it to Broadway , this is the next best thing .

I felt the same way when I walked down Broadway in NYC for the first time :)