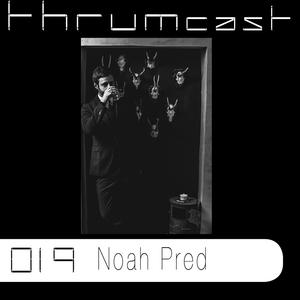 Thrumcast 019 by Noah Pred is probably our most energetic house/tech/dub offering to date, delivered to us in what can only be described as a class of it's own, much like every release on his label, Thoughtless Music.

Producing and performing live for over ten years, Noah emerged from the Canadian underground as a sought-after techno DJ with a sophisticated sound and unique style.

Making the leap to Europe after five years exploring the extensive musical underground of Canada's multicultural metropolis, he comes deeply impacted by the unique influence of Toronto. Launching his Thoughtless imprint there over seven years ago, the label is now on its hundredth release.

Along with a rather enviable list of record labels he has released on, Noah’s latest full-length, Third Culture, continues to earn critical praise, further establishing his reputation as an artist with as much vision as skill.

So hot , really digging this