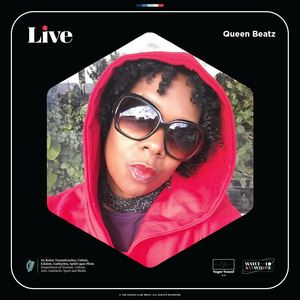 Queen Beatz is based out of Dublin, Ireland. Born in Chicago, IL she grew up, like most Chicago kids listening to House Music which sparked her passion for electronic music. She started DJing as part of Sim Simma nearly 7 years ago. In 2020 she started her own monthly radio show on Dublin Digital Radio uniquely called, Queen Beatz Musical Treatz. Her love for music extends genres and range from Jazz, Hip Hop, R&B, Soul, Rock, Electronic, Funk, Dubstep, Drum&Bass, Disco and everything in between. Queen Beatz is also a poet and writes music for various artists. She is half of ReetaBix, Ben Bix(producer/musician/DJ) produces beats and she recites her poems of them. Their hit 'Happiness' is featured on Tevo Howard's 'Chicago House Heads' EP. The tune 'Damnation' is featured on DDR's Third Compilation & they have a tune called 'Polyglider' on Ben Bix's awaited solo album