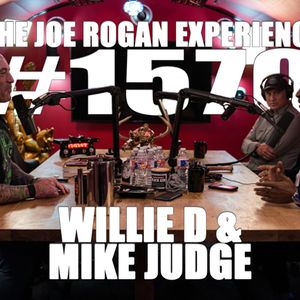 This show was 14th in the global comedy chart.

Rapper, songwriter, and entrepreneur Willie D is a founding member of the classic hip hop group Geto Boys. In addition to his music career, he has been a candidate for public office, written for a widely-read advice column, and is a former Golden Gloves champion boxer. Mike Judge is a writer, director, actor, and filmmaker. He's the creator of Beavis & Butthead, co-creator of King of the Hill & also Silicon Valley, and director of movies such as "Office Space" & "Idiocracy."

More from The Joe Rogan Experience