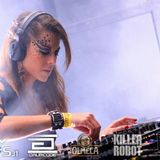 Never miss another
show from THAL!A

Signed to Teknotribe as a label DJ, Thalia is dedicated to paving the way forward for the Underground scene, continually applying new and exciting aspects to her sets. Dancer, capoeirista, singer & songwriter, Thalia is constantly finding new ways to explore music through the body & fuse the two into energetic performances to accompany her fiery sets.

Her DJing career began in 2005, & she has since built up a name as one of South Africa's most respected female DJs. Her soul is progressive, but she is versatile & plays a selection of genres to her dance floors.