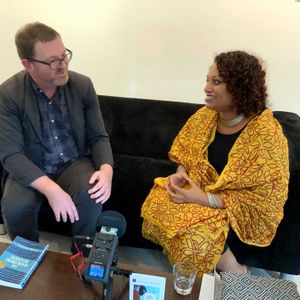 March Talking ArtZ event at Nolan on Lovel Gallery on Saturday 7th March from 3pm was with local writers Craig Billingham and Roanna Gonsalves. Craig hosted the conversation with Roanna, as only another writer can.
Craig Billingham has published two collections of poetry, Storytelling (2007) and Public Transport (2017). He has also published short stories and reviews, most recently in Southerly, Verity La, and the Australian Book Review. He has a Doctor of Arts degree from the University of Sydney.
Roanna Gonsalves is the author of The Permanent Resident (UWAP) published in India and South Asia as Sunita De Souza Goes To Sydney (Speaking Tiger). The book won the NSW Premier’s Literary Award Multicultural Prize 2018, and was longlisted for the Dobbie Literary Award 2018. Roanna currently works as a Lecturer in Creative Writing at UNSW and at NYU Sydney. She serves on the Board of Writing NSW.