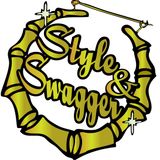 Never miss another
show from Style and Swagger

Style and Swagger began as a monthly show on Reel Rebels Radio in December 2010 (shows 1-7) brought to you by Why Delila, The Large and Kazabon, running the biggest dancehall, bashment, soca and caribbean sounds. The show is now bi monthly on NTS Weds nights/Thurs mornings 1am - 2am.

Why Delila runs bashment night Physically Fit, who have seen some big guests pass through in the short time it's been running: from The Heatwave to Saxon Studio. She is also a resident DJ at Hipsters Don't Dance.
Kazabon co-heads Hipsters Don't Dance, one of London's best nights, at The Camp every first Saturday. They promote the best new bass-heavy, tropical & hip hop sounds.
The Large is the mind behind Shimmy Shimmy, a dancehall blog and clothing line, and home to print zine No Ice Cream Sound. She is also a resident DJ at HDD.