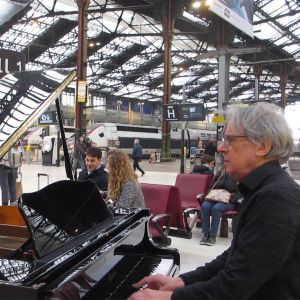 This show is built around John Meed's new single "Side by Side", the first from his forthcoming album (The photo is from the YouTube video of the single, filmed in and around St Pancras station, Gare du nord, Gare de l’est and Gare de Lyon). The track is about a journey from Paris to London and is John's small contribution to the debate about Europe, and a plea for tolerance and diversity. John's song prompted me to put together a few others about sea crossings. There is also new music from Sarah McQuaid, Faeland and The Village (Phil Matthews).