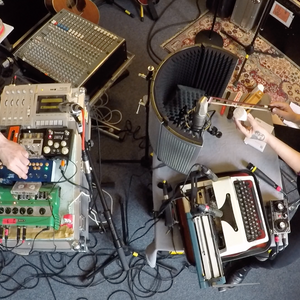 This episode’s guest is vocalist, lyricist and sound artist Anne Munka. Anne is an artist active between music, lyric and sound. She organizes an interdisciplinary series called „Lyrik ist Happening“, where she is also active as a performer, together with changing guests. Also she composes radio plays for different broadcast formats and is part of several music- and theater related productions.

The music in this episode is inspired by the Internet trend „ASMR“. This term stands for „Autonomous Sensory Meridian Response“ and describes a soothing feeling in form of a tingling sensation that typically begins on the scalp and moves down the back of the neck and upper spine. This feeling is triggered by soft sounds like whispering, accents and crackling. We tried to put these trigger effects into musical contexts in different ways, both via microphone and transferred to instruments and samples.