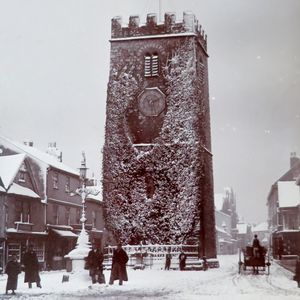 The first of a series produced by volunteers at Newton Museum, What’s the Story Newton Abbot, with support from the South West Museum Development Fund

Hear about Christmas and New Year in the town, including how railway workers got all the parcels in; about the catastrophic flood when the river lemon flowed through the town centre in 1979; about celebrations and dancing around the clock tower; pantomimes; the poultry markets and Christmas dinner in the Workhouse. Produced by Tess Walker, Val Harrison, David Grylls, John Ellis and other Newton Abbot residents along with the museum’s staff.
First broadcast on Soundart Radio 102.5 FM on 27th December 2020.