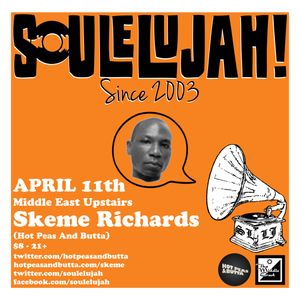 On April 11th, 2015, Skeme Richards dropped in from Philadelphia to play a few records with us. We spent the day checking out the city of Boston, eating dumplings and kickin it with an 88 year old Great Grandmother OG in Chinatown. After filling up on positive energy, we stepped to the Middle East Restaurant to get things moving at Soulelujah.

A lively crowd was on hand to greet Skeme and his first appearance at Soulelujah. Thankfully, the tape was rolling and we were able to capture this moment in time. The following mix was recorded live that night and if you listen closely, you can hear the fine folks cheering along their approval to Skeme's selections.

His recap of the night can be found here:
http://hotpeasandbutta.com/soulelujah-recap/

Thank you for listening!

What is that track at the 34min? Insane horns!

I don't know actually, try reaching out to Skeme on Twitter @hotpeasandbutta

Mandrill-Fencewalk at around 4 minutes, cracking tune.