Scott Down and DJ Cutler - Ultimate Breaks and Beatles 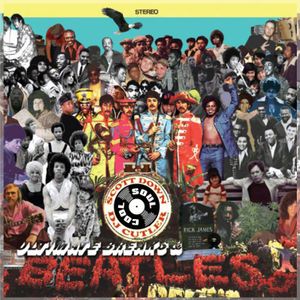 Scott Down and DJ Cutler - Ultimate Breaks and Beatles (circa 2009)

Like the scores of musical sounds and ideas it is meticulously crafted from, Ultimate Breaks and Beatles belongs to nobody yet everybody. Composed of crates upon crates of Beatles records, obscure covers, the entire 25 volume Ultimate Breaks and Beats series and plenty more, it is a celebration of record collecting, DJing, hip hop music, and above all, the unparalleled resonance and influence of both the almighty Beatles and the almighty Ultimate Breaks and Beats series. In the tradition of its two titanic subjects, the mix defies genre; at once spanning, re-contextualizing, and transcending everything from classical to blues to jazz to rock to rap in just over and hour. No computers, sequencers, or techno used here–just a ton of vinyl, two turntables, a mixer, and an 8 track…

Like this? Check out Cutlers RIP MCA mixes here on mixcloud.

I love this! Jamming and cleaning on a Sat morning!

Amazing stuff! What in the good lord domain is that Organ track after DJ Maze? Its divine!

cheers and thanks for listening! There must be a glitch in the algorithm matrix because that break is from Melvin Bliss' "Synthetic Substitution," not DJ Maze. The subsequent track is Clarence Wheeler's take on "Hey Jude." Glad you dig it, many thanks for the kind words.

thanks for listening! Much respect.