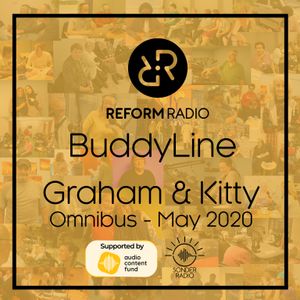 This BuddyLine series was produced by Reform Radio in partnership with Sonder Radio, and made possible by the Audio Content Fund.

Over the next hour, you’ll hear how our second pair, Kitty and Graham got on and how their relationship blossomed over a series of calls. They’ve talked about many things – from family history during the Second World War to the power of social media. These calls originally took place in May 2020.

Buddyline was set up in order to help combat loneliness during these tough periods of self-isolation. Our aim is to improve wellbeing through the power of communication by pairing two complete strangers and starting a regular phone conversation. We’ll hear from the pair six times over a six week period and listen to how their relationship develops.

We Out Here Festival