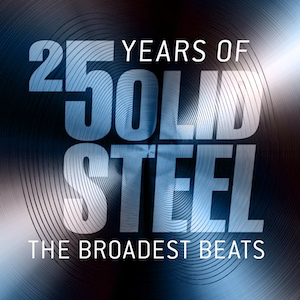 The Horrors, Karen O and the Kids, Gowns, Bjork, Fever Ray and more.

In our 25th Anniversary slot, we welcome back Fink, who has appeared many times on Solid Steel dating back to 1999. We asked for something a little different and taking a brief break from the studio in LA where he's demoing up the new Fink album, he delivers us 30 minutes of avant-bard-core for the ear waves. It's music from The Horrors, Bjork, Fever Ray and House of Black Lanterns, with a couple of remixes courtesy of 16 Bit and Scuba. The new Fink EP 'Warm Shadow' is available for download this week.
Finally, it's a mix from Natural Self to close the show. His new album 'Neon hurts my eyes' is out now on Tru Thoughts and we get a taste of some of the tracks, including his great version of Laurie Anderson's 'O Superman', plus music from The Units, Innerzone Orchestra and the sublime 'The Other Song' by Son of Spirit from 1975.