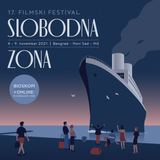 Free Zone Film Festival was founded in 2005 in Belgrade and is being held every year at the beginning of the month of November. Since the year 2013, the Festival is simultaneously being organized in 3 cities in Serbia – Belgrade, Novi Sad and Niš.
As the idea of the “Free Zone Film Festival” is a promotion of high quality engaged and art house cinematography rarely available in Serbia. Since the project was founded Free Zone Film Festival stayed committed to its main idea to open a space for promotion, re-thinking and understanding of current social phenomena and human rights issues in the world, region and country through popularization of engaged cinematography rarely available as part of a regular cinematic repertoire.