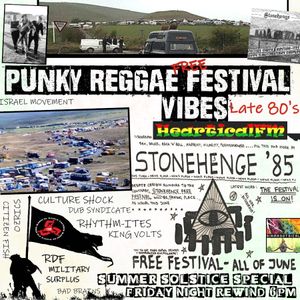 Friday Night Rewind on www.hearticalfm.com 19 June 2020
Going back to another time and space... the heady days of free festivals, the convoy, 'new age' travelers an' all that...
Focus is on bands who played the festival circuit in the late 80s, leading with RDF/Radical Dance Faction/Military Surplus

The UK free festival scene begun late 60s basically ended with Castle Morton in '92 after which our rights & freedoms were heavily curtailed. Years following Stonehenge 'Battle of the Beanfield' 1985 were marked by clashes with police & political activism in line with the Miner's Strike and Poll Tax riots and were a last hurrah for the alternative lifestyle. Hard drugs also took their toll. Bring back the old freedoms, squatters rights & some of that super hashish!

Good for my quarantine!

big up john music is the only remedy trust mi ;) haha i really enjoyed playing this music back again, brought those hazy times right back to me

Support Paul Rootsical by subscribing directly to this channel and get access to exclusive rewards.