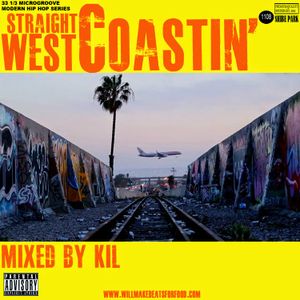 Before NWA dropped "Straight Outta Compton" in '89 the only glimpse into west coast hip hop that cats my age had was Ice T & the movie "Breakin." And those two things weren't enough to sell me on the west coast culture. Now of course, after NWA dropped it was like the levees on west coast hip hop broke and we got a flood of west coast groups coming down the pike but by the time the bulk of the groups that I was feeling (The Alkaholiks, Souls of Mischief, The Pharcyde, Cypress Hill, Dilated Peoples, Lootpack, etc.) came into play I was in college. So again those formative of growing up on hip hop were FAR behind me. So to send a quick salute to the west coast I threw together this mix featuring just a couple of my favorite bangers that the west coast has blessed us with. So whether you rock with the west or not, bet money that if you didn't rock with 'em, after this mix, you will.