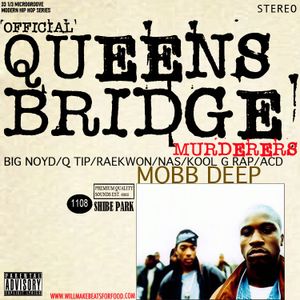 From hosting the Writer's Bench, I've made some comments that have a lot of cats thinking I don't mess with certain MC's/groups. I dropped my Marcy 11206 mixtape last week with some of my fav Jay Z songs (which is FAR from a "greatest hits") to show that I have nuthin' but love for Mr. Carter. And this week I'm dropping my Queensbridge Murderers mixtape to put to rest any hoopla that I don't mess with Mobb Deep. I've definitely had some choice words about P's subject matter, especially some 20 years later after "The Infamous" dropped but trust me when I tell you that I know that when P was on...dude was on. So there's no way that I could EVER front on the music these 2 cats have cooked up over the years and prayerfully this mix can dead any rumblings that got cats thinking otherwise. Salute.