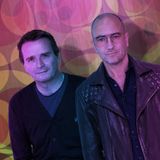 Never miss another
show from The Sheen Resistance

Lost in 1984 when their E-Type Jaguar collided with a lorry just outside St Tropez, The Sheen Resistance were perfectly preserved by its cargo of frozen champagne cocktails. Discovered and revived in 2009, their mission is to bring classic dance tunes to the ears & feet of London. When they're not doing that they can be found modelling safari suits on the catwalks of Paris Fashion Week or travelling between Milan and Monte Carlo by sequinned jetpacks. Probably.

Their Lost In Disco nights combine a love of all the classics with an infectious sense of fun and a genuine party spirit. Time to get glittery, and show some retro civil disobedience on the dancefloor.

The Lost In Disco show is every second Sunday of the month from 9-11pm on Music Box Radio UK.