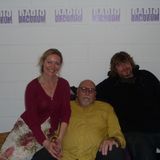 Celebrating the 35th anniversary of LiveAid. Where were you on July 13th 1985?
by Sarah Lowther

Who was lemon drizzled and are husband and wife double acts lockdown appropriate? Sarah investigates
by Sarah Lowther

With more than 40,000 hours of hosting live radio and TV shows in the UK and Asia, Sarah has had full immersion in the world of finance, investment, politics, economics and MUSIC.
She was the voice of Bloomberg Business Breakfast and the face of Daybreak when it aired on The Money Channel and one of the first webcasters for Thomson Reuters.
Other clients Sarah has worked with include The European Union and the Strategic Communications Unit at 10 Downing Street which utilised her skills as a freelance civilian editor.
She has lectured in Business Language at post-graduate level and conducted media training seminars in London, The Netherlands and Geneva for Thomson Reuters and Royal Dutch Shell.
Working closely with the charity sector, Sarah is a podcaster for muscular dystrophy concern The Muscle Help Foundation and has co-hosted events on behalf of Success After Stroke.
Her own business ‘Copytaster’ is the culmination of almost 20 years devoted to the provision of smart words.